The change in policy direction did not result from meaningful dialogue about our health policy goals. In the absence of that dialogue, policy arguments and political arguments are used interchangeably. Informed health policy requires informed discussion. The Michigan Health Policy Forum is dedicated to presenting informed discussion in the belief that a civil exchange of ideas from all sides of the political spectrum will help Forum attendees in understanding the concerns that shape health policy. This understanding is the basis of sustainable policy change in health care. 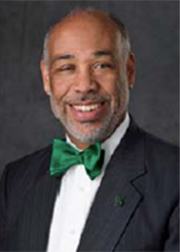 Dr. Rasch was the first State-wide Director of Nursing Services/Programs Director in the Tennessee Department of Correction (TDOC), where he provided leadership and direction for nursing services, and assisted the Director of Health Services with the overall development, management, and operation of Health Services in the TDOC. As part of a three-member management team, Dr. Rasch was responsible for designing and implementing a system of health care for the TDOC, and as Programs Director, leading the development and facilitating the implementation of the Quality Assurance Program for Health Services in the TDOC.

Dr. Rasch has consulted on a multitude of projects including analysis of nursing productivity and workload, and process improvement. Notably, his expertise is in the area of primary care and community health, particularly the roles, functions and appropriate skill mix for all levels of nursing; licensed practical nurses, registered nurses, advanced practice nurses/nurse practitioners, and cultural diversity in healthcare services.

Dr. Rasch’s clinical experiences as a registered nurse include charge nurse on a surgical unit in a community hospital and public health nurse (PHN) and PHN Team Leader and home health nurse in a county health department. As a FNP, he has provided care in a prison system; a corporate health care center; and a nurse managed clinic recognized as a clinical agency by the NC Board of Nursing.

Joseph Antos is the Wilson H. Taylor Resident Scholar in Health Care and Retirement Policy at the American Enterprise Institute (AEI), where his research focuses on the economics of health policy — including the Affordable Care Act, Medicare, the uninsured, and the overall reform of the health care system and its financing. He also studies the impact of health care expenditures on federal budget policy.

Before joining AEI, Antos was assistant director for health and human resources at the Congressional Budget Office (CBO). He has also held senior positions in the US Department of Health and Human Services, the Office of Management and Budget, and the President’s Council of Economic Advisers. He recently completed a seven-year term as health adviser to CBO, and two terms as a commissioner of the Maryland Health Services Cost Review Commission. In 2013, he was also named adjunct associate professor of emergency medicine at George Washington University.

Antos has a Ph.D. and an M.A. in economics from the University of Rochester and a B.A. in mathematics from Cornell University.

Sabrina Corlette is a Research Professor at the Center on Health Insurance Reforms (CHIR) at Georgetown University’s Health Policy Institute. At CHIR she directs research on health insurance reform issues. Her areas of focus include state and federal regulation of private health insurance plans and markets and evolving insurance market rules. She provides expertise and strategic advice to individuals and organizations on federal and state health insurance laws and programs and provides technical support through the publication of resource guides, white papers, issue briefs, blogs and fact sheets. She has published numerous papers relating to the regulation of private health insurance and health insurance marketplaces. A full list of her publications is available here. She also serves on the Standards Committee for the National Committee for Quality Assurance (NCQA) and on the Public Health-Health Care Collaboration Work Group to the Centers for Disease Control and Prevention (CDC).

Prior to joining the Georgetown faculty, Ms. Corlette was Director of Health Policy Programs at the National Partnership for Women & Families, where she provided policy expertise and strategic direction for the organization’s advocacy on health care reform, with a particular focus on insurance market reform, benefit design, and the quality and affordability of health care.

From 1997 to 2001, Ms. Corlette worked as a professional staff member of the U.S. Senate Health Education, Labor and Pensions (HELP) Committee, where she served as health legislative assistant to Senator Tom Harkin (D-IA). After leaving the Hill, Ms. Corlette served as an attorney at the law firm Hogan Lovells (formerly Hogan & Hartson LLP), where she advised clients on health care law and policy relating to HIPAA, Medicare and Medicaid, and the Food, Drug and Cosmetic Act.

Ms. Corlette is a member of the D.C. Bar and received her J.D. with high honors from the University of Texas at Austin and her undergraduate degree with honors from Harvard University. She lives in Alexandria, Virginia with her husband and two daughters.

“We knew we needed a leader who shares our big vision and has a proven track record of accomplishment,” said Fowler, who also is CEO of the Small Business Association of Michigan.

In 2013, the health endowment fund was created by state legislation that allowed Blue Cross Blue Shield of Michigan to convert into a non-profit mutual health insurer. The fund will receive $1.56 billion over 18 years from the Blues.

Hillegonds first day as CEO will be March 16.

With the hiring of Hillegonds, the board will continue to develop its comprehensive grantmaking strategy it began last year, Fowler said.

In 2014, the Michigan Health Endowment Fund awarded a total of $38.14 million in grant awards during its first year to more than 10 non-profit organizations.

“In partnership with public, private and other non-profit organizations, the (fund) will make an enormous contribution to the health and wellness of Michigan children and seniors for years to come,” said Hillegonds in a statement.

Hillegonds is a graduate of the University of Michigan and the Thomas M. Cooley Law School. From 1979 to 1996, he served in the Michigan House of Representatives and also was speaker of the House.

In 1997, he became CEO of Detroit Renaissance, a policy and economic development organization of Southeast Michigan corporate CEO’s.

From 2005 until his retirement in 2014, he was DTE’s senior vice president of corporate affairs.

Sen. Hertel was first elected to the Michigan Senate in 2014 when he won the right to replace termed-out Sen. Gretchen Whitmer. His Senate Democratic colleagues elected him to serve as Caucus Campaign Chair following the 2014 general election.

Prior to being elected, Sen. Hertel had served as the Ingham County Register of Deeds since 2009.

Prior to being elected Register of Deeds, Hertel served for two terms on the Ingham County Commission from 2001 through 2008. Hertel also served House Democratic Caucus as Constituent Relations Director and also the Michigan Department of Community Health as the agency's legislative liaison during the administation of Gov. Jennifer Granholm.

Sen. Hertel is a graduate of James Madison College at Michigan State University.

Sen. Hertel is married to Elizabeth and has four children: C.J., Nathan, Hailey and Jack. Sen. Hertel is the son of former House Speaker Curtis Hertel.

Rep. Canfield was first elected to the Michigan House in 2014 after defeating six other Republicans in the August primary. In the general election, Canfield defeated Democrat David Jaroch with 60 percent of the vote.

Dr. Canfield most recently practiced at the Caro Medical Clinic in Caro. Previously, he ran the Canfield Family Practice with his wife, Cheryl. He also served as a board member for Blue Cross Blue Shield of Michigan.

Dr. Canfield has earned an associate degree in Environmental Health Technology from Merritt College, Oakland, CA, a bachelor’s of science in Biological Sciences from Lake Superior State College and a doctorate of Osteopathy from Michigan State University-College of Osteopathic Medicine. He is a Board Certified Osteopathic Family Physician.

Dr. Canfield served five years in the United States Navy, and has been married to his wife, Cheryl, since 1984. They have four children and one grandchild.